Recording and reporting greenhouse gas emissions is a key part of understanding and responding to climate change. The Isle of Man’s greenhouse gas emissions are estimated as part of the UK’s reporting to the United Nations Framework Convention on Climate Change (UNFCCC) each year. This ‘inventory’ of emissions and removals is estimated according to the Intergovernmental Panel on Climate Change (IPCC) guidance.

The Climate Change Act makes it a legal requirement to report to Tynwald on emissions on a five-yearly basis and ensure that our emissions reporting aligns with international reporting standards.

Work is ongoing to improve the quality of our emissions data to provide the best possible baseline to measure our progress. 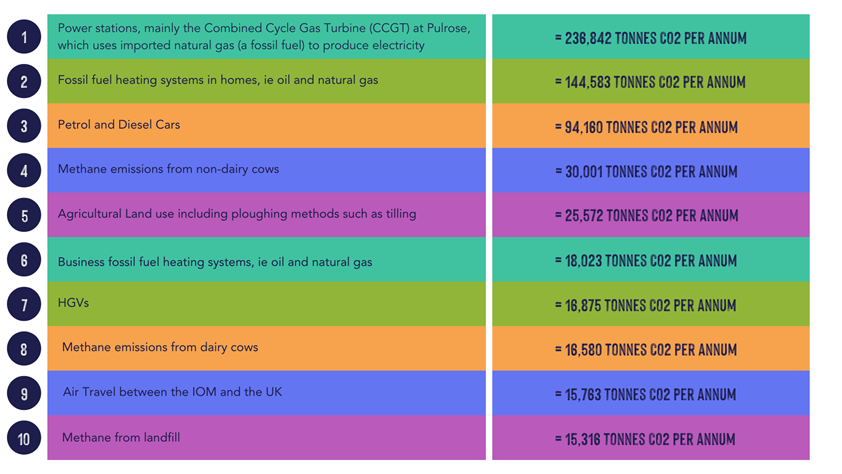 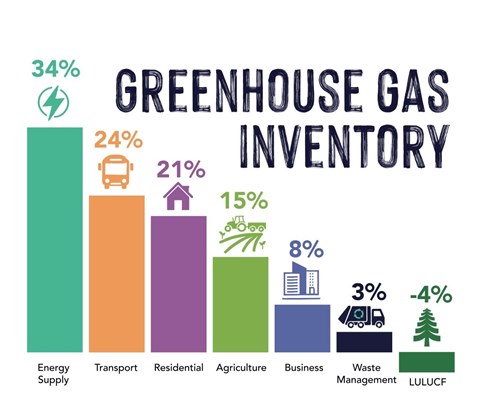 Transport makes up 22% of net emissions (157kT CO2e). The most significant components of transport emissions are petrol and diesel usage for cars, making up just under 60% of the total. Other notable contributors are shipping, aircraft, and HGVs/buses. For travel to/from the UK, half the round-trip aircraft/shipping emissions are allocated to the Isle of Man and a half to the UK. These are excluded from the inventory and are reported separately for international travel (e.g. to the Republic of Ireland). These calculations follow the standard IPCC guidance.

Residential emissions make up 20% of net emissions (146kT CO2e), most of which relate to home heating using oil and gas.

Agricultural emissions make up 15% of net emissions (105kT CO2e). The largest emissions category is methane from animal digestion and waste (mostly cows), followed by emissions from land use such as ploughing methods like tilling. This data is sourced from the Isle of Man Agricultural Census and is considered fairly accurate, though there is scope to refine further with the availability of more detailed information on specific Manx farming practices.

This is a small category, making up less than 1% of emissions. This relates solely to nitrous oxide emissions from food consumption.

This category is a net remover of carbon dioxide. The total removals equate to 31kT CO2e, equivalent to about 4% of the gross emissions. Data on land use is collated from various sources, and work is underway to improve this data.

Approx. 8 tonnes per person per year

Greenhouse Gas Inventory summary dashboard
Net Zero Isle of Man is a campaign managed by the Climate Change Transformation Team within the Department for Environment, Food & Agriculture (DEFA) of the Isle of Man Government.