Here on the Isle of Man, we don’t shy away from our goal to reduce carbon emissions to net zero by 2050. We think the Island is the perfect place to demonstrate nature based solutions – that means planting trees to absorb more carbon dioxide, restoring peatlands to turn them from carbon emitters into carbon sinks, and working with farmers to find ways to work with nature.

But Manxies don’t do anything by halves. Yes, climate change presents us with a huge challenge, but it also gives us an incredible opportunity to take the lead with innovative change. If 85% of the island’s territory is sea, could we harness its power to help fight against climate change and show the rest of the world another way to tackle carbon emissions?

The Manx Blue Carbon Project Team thinks so. By forming an exciting collaboration between marine scientists from the National Oceanography Centre and Swansea University, members of the fishing community, and conservationists, the Isle of Man is proudly leading the way in innovative blue carbon research.

The project could change the world’s perspective on how the sea absorbs carbon, acting as a ‘nature-based solution’. The team is focusing on the potential of carbon storage in our coastal waters, in particular:

There's a lot to get excited about with this project. As a small island, we’re packing a huge punch in the world of marine conservation. It’s a fabulous opportunity to use our size and rich marine heritage as our strengths, taking a world-first ‘whole system’ approach to protecting our blue carbon, with business, science, conservation, and government working together.

Why is Blue Carbon important in the fight against climate change?

We often think of trees as being the superheroes of the carbon world. But healthy seas also absorb carbon and lock it away in underwater plants and sediment. As a result, they’re known as a “carbon sink”, absorbing up to 25% of all the carbon we produce.

What’s more, we have some extraordinary carbon-storing sea habitats around our island. Seagrasses, salt marshes, and plenty of seaweed mean that our seabed and shores could hold a key to good carbon storage and management.

Seagrasses can absorb carbon up to 35 times faster than the Amazonian rainforest – a mighty superpower for a little-known underwater habitat. These hidden heroes also protect our coastline against storms and flooding, keep the sea healthy and help our fishing industry by providing essential habitats, nurseries, and food for commercially important fish. 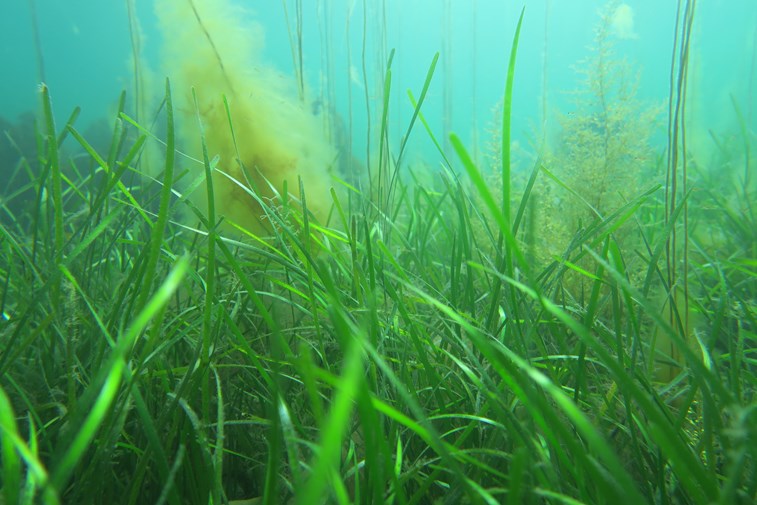 Image of Eelgrass, a type of Seagrass that grows on the seabed of the Isle of Man, taken by R Henthorn.

The oxygen bubbles sent up from seagrass meadows sound like little bells when they burst, acting as a signal to sea creatures who depend on the seagrass. Seagrasses are environmentally-friendly musical underwater gardens.

Salt marshes occur where the saltwater of the sea meets the fresh water of rivers. Salt marshes act as buffer zones between the land and the sea. They play an essential role in absorbing storm wave energy and protecting nearby coastlines from erosion.

Salt marshes may look muddy and spongy, but they can store and lock away carbon faster than trees and forests, making them an essential warrior against climate change. 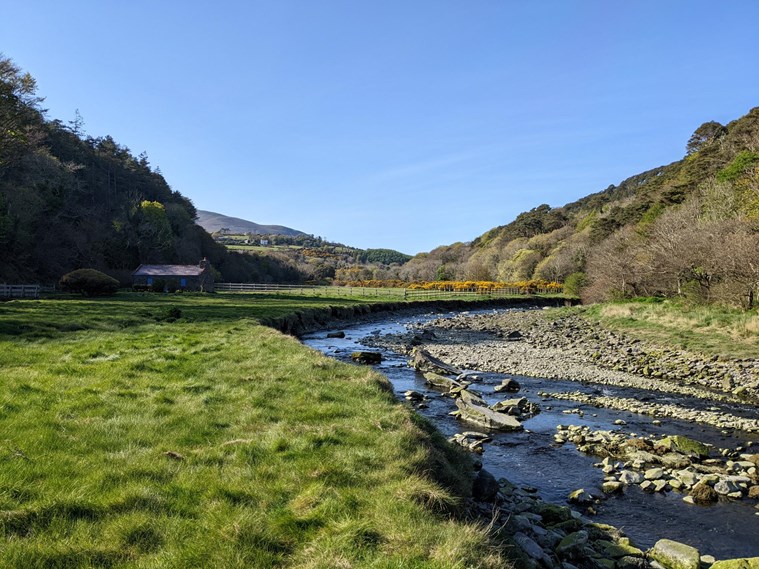 Salt marshes filter out pollutants and sediment before they reach the sea, and from above they look like a system of airways. So by protecting our salt marshes, we’re protecting our ocean’s lungs!

The salty scent of seaweed as it sits on our shoreline is the true smell of home. But did you know seaweed stores carbon too? 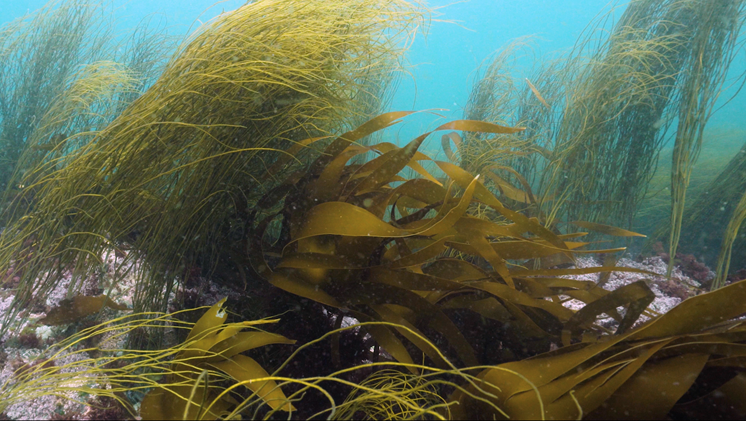 Image of Seaweed on the seabed of the Isle of Man taken by Lewis Jefferies.

Seaweed absorbs carbon dioxide from the atmosphere to help it grow. When it dies, some of that carbon is released back into the ocean, but some is buried in the seabed. This process keeps carbon locked away in the sea rather than in our atmosphere.

The Manx Blue Carbon Project is unique because it’s investigating the carbon storage potential of our whole sea, including kelp and marine mud. Not only that, but also where the stored carbon is coming from and how we can protect and restore our blue carbon habitats.

What are the blue carbon project team doing now?

This incredible project will occur over three phases, with phase one well underway.

A time capsule of carbon storage

The team has been busy out and about carrying out fieldwork, carrying out essential core sampling from the coastal areas around the island in spring 2022.

By pushing pipes into the ground during low tide, core sediment samples were collected from the coastal areas around the island. These samples provide a fascinating snapshot of the different seabed sediments over time. Each core is like a time capsule, recording potentially thousands of years of seabed history. Cool eh?

What’s more exciting is that these samples can help scientists figure out how much carbon has been stored in the seabed over the years. They can even figure out what plants and animals the carbon originally came from.

If you were looking from the west coast out to sea in June, you may have caught a glimpse of the team bobbing over the waves in the Fisheries boat, Barrule, heading to collect core samples from the deeper offshore seabed. 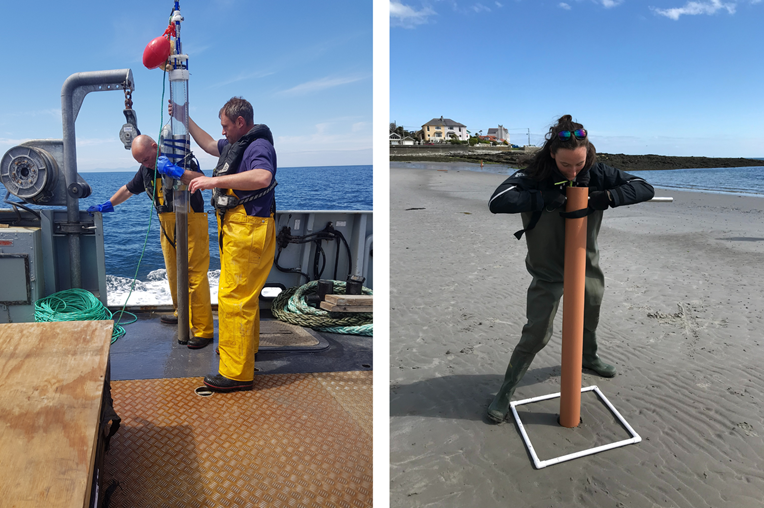 A map of underwater gardens and carbon-rich habitats

In autumn 2022, the team will use a drone to take hundreds of aerial photos of the island’s coastline. The photos will be pieced together, like a vast jigsaw, to create one picture of the island’s underwater world. So not only will environmentalists be able to use land maps, but they’ll also have a clear picture of the underwater seagrass meadows and habitats that flourish under the waves.

Once the team knows how much carbon is stored in specific core samples (a seagrass bed, for example), they can multiply that by the area of the coastline covered by seagrasses and find out exactly how much carbon the seagrasses are storing. The island will be among some of the first places in the world to have access to detailed blue carbon storage data – definitely something to make the island proud.

A collaborative and community-based approach to Blue Carbon conservation

The Manx Blue Carbon Project offers much more than a way to offset the island’s carbon emissions. It’s creating real collaboration between people and organisations that care for the environment and have a link to the island’s seas.

From our fishing community to conservation organisations, the formation of the Manx Blue Carbon Working Group will ensure local businesses and government coordinate and collaborate on the island’s blue carbon research.

Our seas are in safe hands and, with increased conservation, have the potential to help the island reach its carbon emissions Net Zero goal by 2050.

Want to find out more? Chat with the team

Climate change affects us all. But, we can make history together by taking bold action while we still have time. It’s easy to feel a little overwhelmed at times, but there are so many different ways to get involved in tackling climate change. All actions, no matter how small, make a difference.

If you’re interested in discovering more about blue carbon and the exciting work the Manx team is carrying out, you can contact them on contact details or look out for them at some of our island’s biggest events, and the team will be happy to answer any questions you may have.

For more information on the Isle of Man's Blue Carbon watch: Sleih ny Marrey - People of the Sea: A blue carbon journey  - a short film telling the story of the Islanders who are working to protect the sea, and the wildlife and plants that call it home.