The impact of climate change on the Isle of Man

The Isle of Man Meteorological Office opened in 1947 and its first full year of weather records was 1948. The graph below shows how the annual temperatures recorded at Ronaldsway have changed over time.

The average temperature for the middle 30 years (1971 - 2000) was 9.8oC.  Years shaded blue had a mean temperature below that average and years shaded red had a mean temperature above average. The Island’s climate has become warmer by 0.9oC over the past 73 years. Climate change is not something that will only happen somewhere else - at some time in the future. This evidence shows that it is happening here and has been for several decades now.

Globally, increased CO2 in the Earth’s thin atmosphere has contributed to higher temperatures. NASA reports that the surface temperature of the planet has risen by over 1oC since 1880 and NOAA estimates that ocean temperatures have risen by a similar amount. 2020 was the hottest year on record.

The senior meteorological officer at Ronaldsway, Adrian Cowin, recognises that warmer atmosphere and warmer oceans will hold more energy: “In a nutshell, it’s likely that we’ll see more extreme weather events, more often, in the next few decades as well as the impacts of rising sea levels on coastal communities and infrastructure. Equally, there’s an increased risk of a few more periods of drought and/or summer heatwaves, or winter ‘cold snaps’, as occasional high pressure ‘blocks’ become established either over the Atlantic or the British Isles or continental Europe.”

There is no clear trend in extreme weather events in the Isle of Man yet - but we have certainly seen some extreme weather.  The British Isles Weather Diary for 1st October 2019 reported that: “On the Isle of Man, a major incident was declared as floodwaters trapped people in their homes… the village of Laxey was cut off after its second major flood in four years. The river that gave the village its name burst its banks (see photo), leaving people trapped in their homes”. The automatic weather stations at the Mountain Box and Corrany recorded over 100mm (4 inches) of rainfall within 24 hours, mostly concentrated in the early hours of 1st October. One month’s rain fell overnight - an extreme weather event. 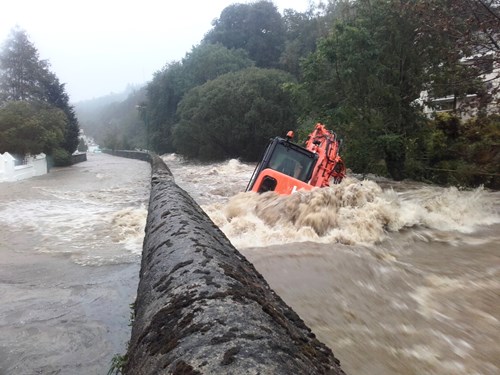 There were several factors that contributed to the Laxey Flood but the Independent Review, commissioned by the Cabinet Office, and carried out by Arup consultants, offered the comment that “Climate change around the world is increasing the frequency and intensity of storms... The Isle of Man is no exception to these global trends.” The report claimed that there have been “…at least 27 floods affecting different communities on the Isle of Man since 2000” and that these are estimated to have cost communities well in excess of £28 million. It goes on to suggest that “…over 4,000 properties on the Island are potentially vulnerable to flooding”.

The message is clear - we need to be prepared.  The Department of Infrastructure’s ‘Isle of Man Flood Hub’ offers an interesting insight into the preparations that are already underway to reduce coastal flooding. Around the Island the risks include: “…coastal overtopping from high tides and storm surges. The frequency and severity of this type of flooding is predicted to rise”. The problem is greater than just rising sea level. Stronger storms will push more water onshore.

Defences are planned for harbours and for open coasts. Many of the harbour projects are already well underway. In Castletown, the harbour was assessed to have a risk of tidal flooding in a 1 in 10-year event. Residents in the harbour area could confirm their experiences of this. Predictions for one hundred years time, with rising sea level and increased storms, were that the town would experience tidal flooding in a 1 in 1-year event. The barrier that has now been constructed and finished with a Manx stone wall, in-keeping with the historic centre of the town, is reinforced and designed to defend Castletown from a 1 in 200-year event.

In Ramsey, different construction types are planned for different parts of a 700m barrier, including some sections using 1.3m glass panels with aluminium frames (see photo of a similar barrier in use elsewhere). This would be more in-keeping with a quayside regeneration programme. There is no firm date for construction to begin and planning permission is still required, but the barrier will again be designed to provide protection against a 1 in 200-year flood event. This will bring an end to images of a flooded Parliament Street. 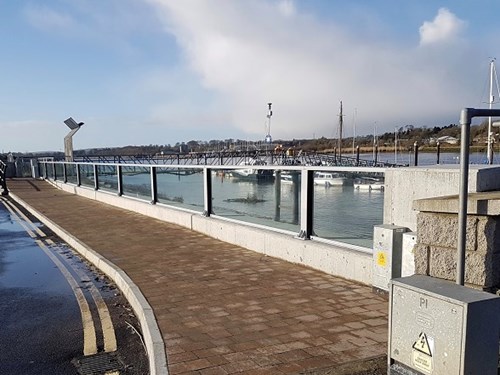 CO2 entering the atmosphere typically remains there for between 300 and 1,000 years. If global temperatures continue to creep up above 1.5oC (the Sky TV Daily Climate Show ‘digital dashboard’ suggests that this is just 11 years away), or even 2oC, we will not only see increased storms and extreme weather events in the Isle of Man in our lifetimes – we will make them a permanent fixture for many generations to come.