2022, the warmest year on record for the Isle of Man

Last week the Met Office at Ronaldsway confirmed that 2022 was the warmest year ever recorded in the Isle of Man. 2022 was also the warmest year on record for both the UK and the Republic of Ireland. Studies show that human-induced climate change has made record-breaking annual temperatures around 160 times more likely.

An attribution study conducted by Met Office scientists has shown that what would have been around a 1-in-500 year annual temperature in a natural climate, where human climate influences are removed, is now likely every three to four years in the current climate. 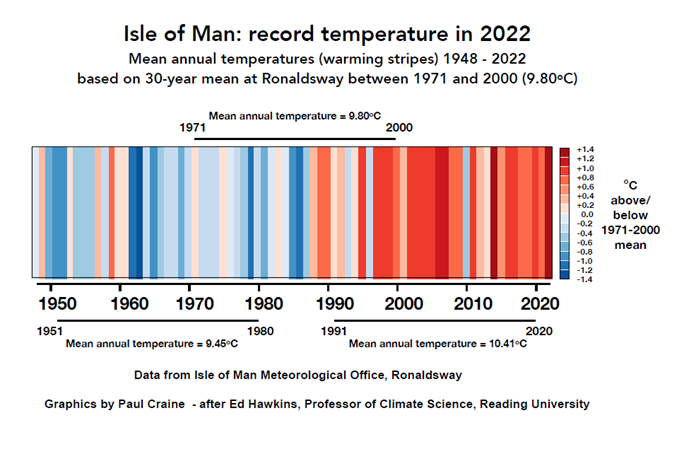 Mean annual temperatures are based on recordings made every day of the year. They starts with the mean (average) of the temperatures taken each day. These are then used to calculate the mean temperature for each month. Finally, the average of the mean monthly temperatures is calculated.

Last year, the mean temperature for every month except December was higher than the long-term average for the Isle of Man. The Met Office has been based at Ronaldsway since the airport opened in 1947, and in 2022 the station marked its 75th full year of continuous data.

The Senior Meteorologist at Ronaldsway, Adrian Cowin, has highlighted some of the technical factors involved in the global picture:

“It’s interesting that, in line with expectations from international climate change models, many parts of the planet have seen some further extreme weather events, as well as new record-breaking climatic records for rainfall and/or temperatures, across all seasons in 2022. This can be linked to various atmospheric events e.g. jet-stream meandering / blocking and disruption of the Polar Vortex, as well the ocean-atmosphere effects for the third successive year of La Nina cooling the tropical parts of the central & eastern Pacific. Closer to home, many European countries experienced some extreme rainfall events as well as wildfires and ‘heatwaves’, and several national temperature records were broken.”